Meet Angela I think it takes a deep wisdom and a deep kind of caring to see a relationship go through ups and downs,
that break and reform in a new way.

Upon listening to Angela’s first response, I was hooked. Having just returned from receiving some long-awaited dental work, Angela was in great spirits. Angela was born in Germany and immigrated to Guelph in 1967 at the ripe age of three. As a child, she faced some difficulties, yet when I asked what her aspirations were growing up, she responded light heartedly: “I loved swirling in my dresses, so probably a dancer or something. Especially if I had a brand new dress on, I would just swirl. My mom used to do my hair in dandelions, the white ones. She would put them in braids”.

Throughout the conversation, Angela painted a beautiful picture of her childhood, her family and her friends. She describes herself as being “bubbly” and smart. Mary, Hope House’s designated social worker and Angela’s confidante, shared her thoughts about Angela’s assets:

“Angela has a deep wisdom about her. One of the things about Angela is her relationships. She has a long-time friendship with her ex, and it’s a beautiful friendship. I think it takes a deep wisdom and a deep kind of caring to see a relationship go through ups and downs, that break and reform in a new way. So I think that’s a real strength that not a lot of people have”.

Not only is Angela great at maintaining relationships, but I learned that she excels at connecting people. Angela and Mary shared a story about how a community member Hope House was supporting needed to move a piece of furniture but didn’t have the connections or resources to do so. Without hesitation, Angela was able to get a hold of a local mover and get the job done. Angela believes that sharing a smile with those around you and feeling the love and support from friends and family, is what makes community. It’s clear that she lives by these beliefs.

Despite experiencing some difficulty with the educational system, Angela is taking ownership of her thoughtful and caring personality and is pursuing a degree as a Personal Support Worker (PSW). If she treats her patients like she treats everyone else at Hope House – calling us “sweetie” or doling out a compliment – she’s going to enrich many lives. As for Hope House? Well, we’ll continue to be a place where Angela could come and cook, volunteer, and involve herself with everything that’s going on, because we’re better off seeing her infectious smile every day. 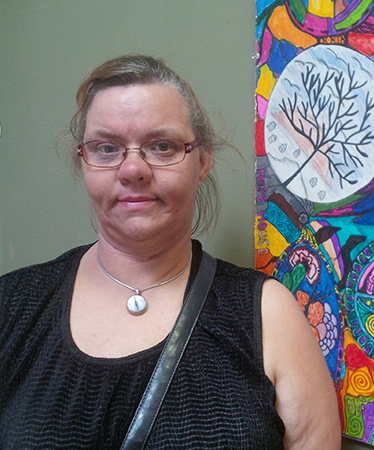